Archeological and paleontological discoveries show that Homo sapiens existed in Palawan circa 50,000 BC. The aboriginal people of the Philippines, the Negritos, are an Australo-Melanesian people, which arrived in the Philippines at least 30,000 years ago.

The Austronesians, who originated from populations of Taiwanese aboriginals that migrated from mainland Asia approximately 6000 years ago, colonized the Philippine islands and eventually migrated to Indonesia, Malaysia and, soon after, to the Polynesian islands and Madagascar.

Islam was brought to the Philippines by traders and proselytizers from Malaysia and Indonesia. The Islamization of the Philippines is due to the strength of then-Muslim India. By the 13th century, Islam was established in the Sulu Archipelago and spread from there to Mindanao; it had reached the Manila area by 1565. Muslim converts established Islamic communities and states ruled by rajas or sultans. However, no Islamic state exercised sovereignty over much of the archipelago, and the indigenous maritime and agricultural societies ruled by datus or apos remained autonomous.

When Ferdinand Magellan landed 1521 on the island of Homahon, he took possession on behalf of King Philipps II and named it Felipinas - the Philippines. At this time he knew a little about the wealth of these still unexplored fantastic islands. He also had no idea of the spectacular sunsets and the moderate climate which brought such a warm hearted and friendly people, who should be known later all over the world because of its friendly hospitality.When the Spanish conquistadors arrived, they found well developed settlements. Prior to this Spanish colonization in 1521, the Filipinos had a rich culture and were trading with the Chinese and the Japanese. The Spaniards recognized the potential of these strategically well positioned islands and they established 1571 in Manila a colonial government, from where they controlled the country and the trade. Spain's colonization brought the construction of Intamuros in 1571, a "Walled City" comprised of European buildings and churches, replicated in different parts of the archipelago. In 1898, after 350 years and 300 rebellions, the Filipinos, with leaders like Jose Rizal and Emilio Aguinaldo, succeeded in winning their independence. 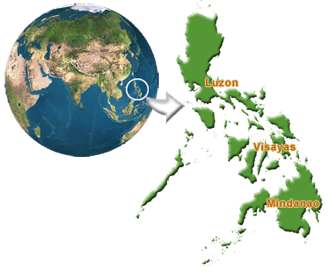 The Philippines can be found in South-East-Asia, to the north of the equator and 160 kilometers to the south of Taiwan. The Philippines is made up of 7,107 islands covering a land area of 299,404 square kilometers. Approximately 2.000 islands are inhabited. The Philippines are divided geographically and culturally into regions, and each regional group is recognizable by distinct traits and dialects - the sturdy and frugal llocanos of the north, the industrious Tagalogs of the central plains, the carefree Visayans from the central islands, and the colourful tribesmen and religious Moslems of Mindanao. More than 2.500 islands are not registered. Some 80% of the population is Catholic, Spain's lasting legacy. About 15% is Moslem and these people can be found basically in Mindanao. The rest of the population is made up mostly of smaller Christian denominations and Buddhist.

The Philippines is the world's third-largest English-speaking country next to the United States and the United Kingdom. Therefore, English is widely spoken in the Philippines, and most signs are in English. The national language is Pilipino (Tagalog) but there are over 100 regional dialects.

The climate is tropical. From July to November is rainy season, December to February is dry and March to June is hot. Average temperatures are between 25°C to 32°C while the humidity is 77%.

The Philippines' monetary unit is the peso, divided into 100 centavos. Foreign currency may be exchanged at any hotels, most large department stores, banks, and authorized money changing shops accredited by the Central Bank of the Philippines. International credit cards such as Visa, Diners Club, Bank Americard, Master Charge, and American Express are accepted in major establishments.

It's the same every time. You'd planned it all so carefully with a list as long as a telephone directory. Then halfway through your holiday you find you've forgotten some vital detail. Unfortunately, you can't insure against misfortune and accidents, but you can foresee the minor surprises with some degree of probability. It's always good to have something handy to relieve pain, diarrhoea, constipation, travel sickness, itching, sunburn, inflammation, infection, an insect bite, so include such items in a first aid kit for travelling abroad. Also do not forget your daily medicine, plasters, thermometer, bandages, tweezers and scissors.
Certain types of vaccination have to be administered well in advance of your departure, so check the vaccination information to make sure that you have your vaccinations in good time. It's a good idea to clarify the need of vaccination against typhoid, hepatitis A and B with a medical specialist. Do not forget to ensure that tetanus, polio vaccinations and diphtheria are kept up to date.

The risk of malaria transmission varies greatly in South East Asia, with low risk in many areas.
Variable risk: rural areas below 600 meters: East of Luzon, parts of Mindanao, Palawan, Samar, Sulu-Archipelago and Mindoro Occidental
Low risk: rural areas above 600 meters and all other parts of the country
No risk: urban areas and the islands Bohol, Catanduanes as well as Cebu

Citizens from most countries may enter the Philippines without a visa upon presentation of their passport, which must be valid for at least six months after entry, and a return ticket to the home country or an onward ticket to another country. Upon arrival, immigration authorities will annotate the passport with an entry visa valid for 30 days. If you plan to stay longer than 30 days, you must apply for an extension at the Philippine Bureau of Immigration and Deportation. Persons who overstay their visas are subject to fines and detention by Philippine immigration authorities.

Home to more than 2,500 species of reef fish and more than 75 percent of the world's coral species. Set priorities for the life. Avoid the purchase of every animal species as for example the giant's mussels.

Email
This email address is being protected from spambots. You need JavaScript enabled to view it.